North Dorset is a large mainly rural Constituency 30 miles wide from Osehill and Glanvilles Wooton in the west, to Alderholt on the Hampshire boundary; and 25 miles north to south, from Bourton in the north, right on the Dorset border with both Somerset and Wiltshire down to Jubilee Cross some 2.5 miles north of Poole. To cross in either direction takes an hour by car, and the journey will take you through some of the most beautiful parts of the Country. It is home to two of England's designated  Areas of Outstanding Natural Beauty, and the area features in many of Thomas Hardy's works.

The east is dominated by the high chalk landscape of Cranborne Chase - the first of our AONBs, with archaeological remains from the early prehistoric through Roman and mediaeval - Cranborne was Thomas Hardy's Chaseborough and the scene of great revelry and drunkenness in Tess of the d'Urbervilles story. The Constituency's largest town, Verwood is here. Once famous as a centre of pottery making, known as Fayrewood, it has grown rapidly over the past half-century and is home to over 15,000 people. It also enjoys the rather unfortunate distinction of being the largest town in Dorset without an Upper School.

As we go west the land falls away from the scarp face of the Downs and is a gentler country with rolling hills draining into the River Stour. This is the Blackmore Vale, part of the Dorset Area of Outstanding Natural Beauty,  and it is along the river that we find the historic towns of Blandford Forum, Sturminster Newton, and Gillingham - along with many ancient villages. Just off the scarp face, Shaftesbury lies snuggled in the folds of the Chase, with the famous Zig-Zag Hill leading up to Charlton Down. Towards the west of the Constituency lies Marnhull, Hardy's Marlott, and the opening backdrop to Tess of the d'Urbervilles.

The Constituency is a farming area, with  dairy farming predominating on the clay soils of the Vale, and sheep up on the chalk downland. Farming and Tourism are large local employers, though the Constituency has a whole range of industry and many small businesses have established themselves here. Road and rail infrastructure is poor, with only two trunk roads, the A350 and the A354 centring on Blandford and a single railway station in Gillingham.

The extent of the constituency is outlined in red in the map below. 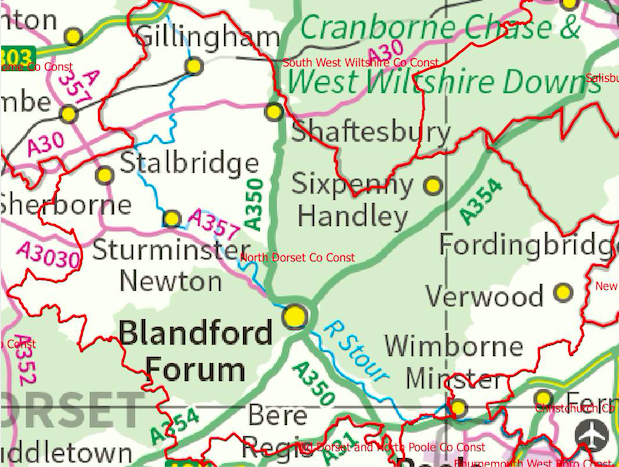