Currently, the Chair of the North Dorset Liberal Democrats is Fiona Leacock and the treasurer is David Webb. We have a vacancy for the Secretary.  The active team also includes the volunteers who deliver membership services and ensure adherence to data protection and campaigning rules and protocols. The team is also focused on local party development and on identifying and addressing the key issues and concerns of the people and communities of North Dorset.

Every input or offer of support is welcome from across all parts of the constituency and from each and every diversity. If you would like to join in and have your say, please contact us here

I live in Shaftesbury and chair the Maltings Residents Association, I am a retired Magazine Printer and Union Official at National level. At present and for the past 20 years I have promoted Music and as the Main Organiser for Wessex Acoustic Folk club I run music events in Blandford. I have been on the Noth Doret Lib Dem Executive for four years with a strong belief in having strong links with the EU.

Career in Sales, Marketing and Business Strategy in electronics and aerospace in the UK and overseas.  Now retired. Volunteer mentor with Dorset Business Mentoring supporting small businesses across the county and a volunteer with Young Enterprise, taking ideas about skills, careers and the nature of work into schools. Parish Councillor in North Dorset, Project Manager of the North Devon business mentoring service and a seaside town community development project. Chair of a North Dorset market town community taskforce.

Ros joined the Liberal Democrats in 2017 and stood for Stalbridge and Marnhull Ward in the Dorset Council in 2019.

She is a chartered electrical engineer, who stared her career in defence research and moved to the world of air traffic management systems before retirement.

Ros moved to Dorset in 1987, initially to Weymouth and has now lived over 25 years in Marnhull.  She is very keen to ensure that today’s youth is well supported to make the most of their abilities in their career so has been involved in the Young Enterprise Scheme over a number of years.  Green issues are also very important to her, so she has helped to set up Marnhull Green TEAMS which is undertaking a number of Green projects in Marnhull and the surrounding area.

Linda Harmer-Jones has been an active member of the Liberal Party and subsequently the Lib Dem’s since her mid 20s. She spent her whole professional life in social work and for many years has been a senior operational manager of Child Protection and Children and Care Services. She is currently undertaking improvement work in a local authority which has significant challenges.

Linda joined the Liberal Party when living in Surrey because she shared the party’s belief in the promotion of a caring society, liberalism, devolved governance and community grass roots activism.  She has held officer roles in Surrey, Hampshire, Penrith and the Borders and settled with her husband in North Dorset 2 years ago and quickly came forward to ran our General Election day in Blandford. Linda will be co-ordinating future campaigns and will be the legal agent in elections.

She looks forward during 2021 to engaging with local residents to understand their views and priorities for North Dorset and working as part of our enthusiastic team to deliver initiatives that will make a positive difference to local communities across North Dorset.

Gary joined the Liberal Democrats in 2019.  He is a chartered civil engineer and leads Costain Ltd’s defence & security consultancy business in the UK.

Raised in Northern Ireland before training at Sandhurst, Gary went on to serve for almost 30 years with the Royal Engineers, leaving in 2015.  He settled in Shaftesbury, North Dorset with his family in 2011.

Strongly focused on opportunity for young people, Gary is a STEM ambassador and a BiTC social enterprise mentor, working most recently with the military co-working network, a social enterprise helping to maintain and develop careers for the partners and families of service personnel. 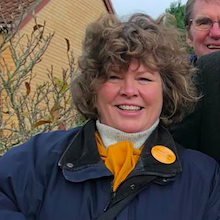 It’s customary to write this sort of thing in the third person, but why conform to such a dull convention when the written word is so wonderfully fluid and immediate?

So, this is me. Fiona Leacock.  I am the current Chairman of the North Dorset Liberal Democrats. A very small cog in the exciting, hard-working and talented wheel that is the NDLD team.

How I got  here is still a bit of a mystery, even to me.

As a teenager way back when, notwithstanding the fact that both my parents were Conservative Councillors, I realised there was a correlation between the notion of fairness, respect and justice and a healthy and happy society. It’s a drum beat that reverberates with me to this day.  In terms of Liberal Democracy, I’m a lifer…

We and our seven children have lived in this beautiful part of the Country for nearly 20 years. I love it and the open-hearted, generous, straight-talking people who call this County home.   North Dorset is often perceived as the place passed through to get to a destination - the Coast, Devon and Cornwall. While that is a blessing to many of us, it does mean we’re overlooked when it comes to the allocation of resources. More often than not, we’re the last in the queue. North Dorset survives on  scraps.

As a team, our job is to raise awareness of the challenges faced by many in North Dorset, rural poverty, affordable housing, the lack of many public resources. We’re here to put North Dorset firmly on the political map. We’re here to make sure fairness, respect and justice applies to everyone, not just the powerful and wealthy.

Come and join us.

Raised in beautiful North Dorset, I know there is much that can be done to improve the lives of the people who live here. In that regard, my guiding political principle is fairness.  This is what liberalism means. Ensuring freedom and opportunity is shared, not hoarded by a few privileged individuals.

I run my own business in events management and I understand the challenges that many small and medium-sized businesses face in the wake of the Covid-19 pandemic. We must ensure we support this critical part of the North Dorset economy.

After seven years as a school governor, I know that education is the keystone for a fairer society - with Early Years playing a particularly vital role in children’s life chances.  We have many outstanding schools and teachers in North Dorset: let’s make sure all our children get an excellent education.

Having previously worked with adults and children with additional needs, I am tremendously proud of the Liberal Democrats championing North Dorset carers. Carers who make such a difference to thousands of lives and too often are ignored by the government and council.

I want to empower local people to fully access their communities, to play their part and to thrive in a sustainable, forward-looking North Dorset.

If you share these goals please get in touch, I’d love to hear from you.

I’m heavily involved in fighting the appalling proposals to treble the size of Alderholt and the knock-on consequences across the surrounding area. I also want to improve public transport facilities, social care provision for our vulnerable, and local maintenance across the new Cranborne and Alderholt Ward.

This corner of North-East Dorset has been home to my family and myself for over half my life, and I’ve been active within the village for most of that time. I’ve been involved in the scout movement, Alderholt Rugby Club, and have served on the local parish council for several years, including as its chairman.

I was the chairman of the group that set up the multi-use game area (MUGA) in the wonderful local 'Amanda Harris Memorial Ground' and, more recently, was largely responsible for installing the outdoor gym and table tennis table there.

I have been an active member of the Liberal Democrats for about 30 years and have been a district councillor and a local party officer in Hampshire and Dorset. My principal roles as Treasurer are to look after the local party’s finances and ensure that legal and Party requirements are met, while assisting with the election of Lib Dem members to Dorset Council and Parliament in order to achieve the objectives of the Party.