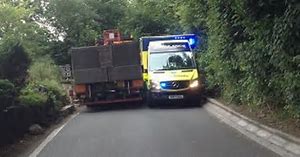 'Melbury Abbas and Cann Group Parish Council' have filed for a judicial review of Dorset County Council's traffic management scheme for the A350 and C13 roads. The scheme affects Melbury Abbas village and the wider area.

Please help fund the parish council's application for a judicial review at:

The A350 Blandford-Shaftesbury road was designated in 1922 and, despite a huge increase in motorised traffic since, both it and the parallel-running C13, have not been fundamentally improved to this day with increasing traffic chaos.

These days, massive continental juggernauts from the Poole Ferry terminal, on their way north to the M4/M5 motorway network, and then back south again, are travelling along the two roads. But the roads are hardly better than cart tracks in places - and still Dorset County Council and the Government do not come up with proper long term solutions to the problem.

On the 6th December 2017, Dorset County Council decided to continue with its advisory system for heavy good vehicles (HGVs) travelling between Blandford and Shaftesbury. This asks HGVs to travel north on the A350 and south on the C13.

This decision was arrived at, it is understood, against the representations of the police and emergency services who instead wanted weight restrictions placed on the C13. Such restrictions are understandable as the C13 through Melbury Abbas is mostly a single track road with many tight turns and very steep gradients. Traffic chaos can then build up when two HGVs, proceeding in opposite directions, meet in the village and cannot pass each other. 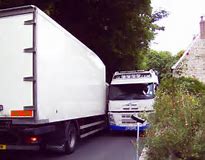 And this can easily happen as it is apparent that many HGVs are unaware of the DCC advisory system. So, it only needs one HGV going north along the C13, most likely from Continental Europe, to cause a complete grid-lock in the village for many hours - wasting the time of the police and many others as it is all unpicked. And in addition diverting all the traffic onto the A350 causing more confusion there.

The council supported its new advisory system with some improvements to the A350/C13 such as the following: 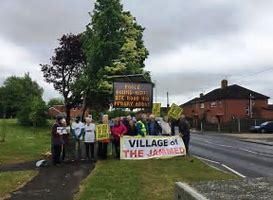 The decision by DCC to ignore the suggestions from the emergency services of weight restrictions on heavy lorries using the C13 seems extremely unwise and could cause blockages which would result in serious delays to emergency vehicles - as has already happened. The only way forward is to provide proper infrastructure - namely a Melbury Abbas by-pass...